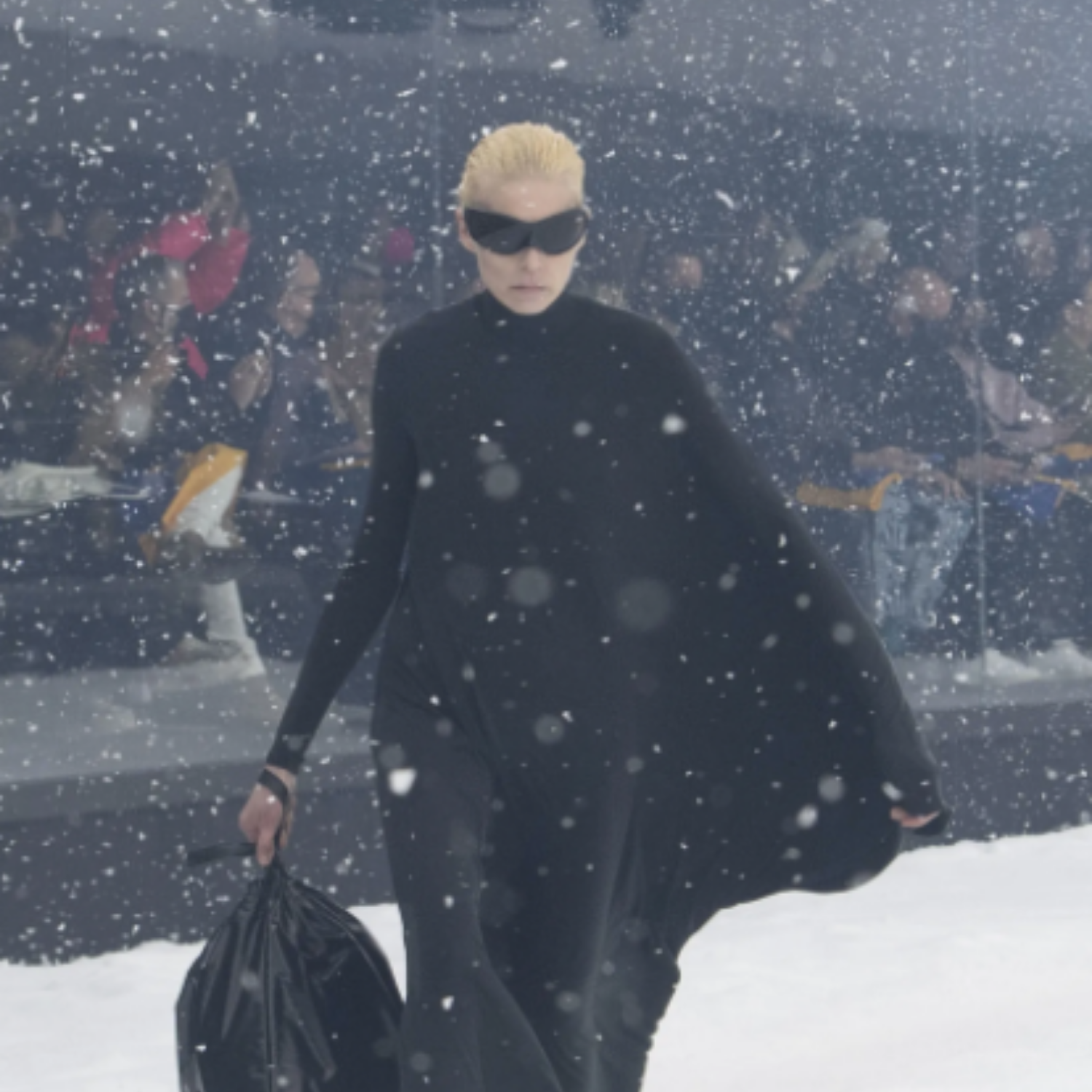 The Top Fashion News of March '22

March marked the end of fashion month. A month filled with shows, events and parties. It felt less like a “new normal” and rather a return of a pre-pandemic world.

This was true for Ralph Lauren who hosted the brand’s first show for the past two years. Burberry also put together a massive real-life event at London’s Central Hall Westminster, while Demna at Balenciaga put together a show with an ode to the current state of the world and especially the war in Ukraine. On the opposite side of physical, March marked the first fashion week being held in the Metaverse. Showcasing how the digital will only be more important moving forward.  Finally, March is all about awards – and the Norwegian movie “World’s person in the world” was nominated for two Oscar Awards. Despite having to return home empty handed, Renate Reinsve has quickly become an award favorite, famed for her unique and “badass” take on red carpet favorite. The Oscars was no exception. 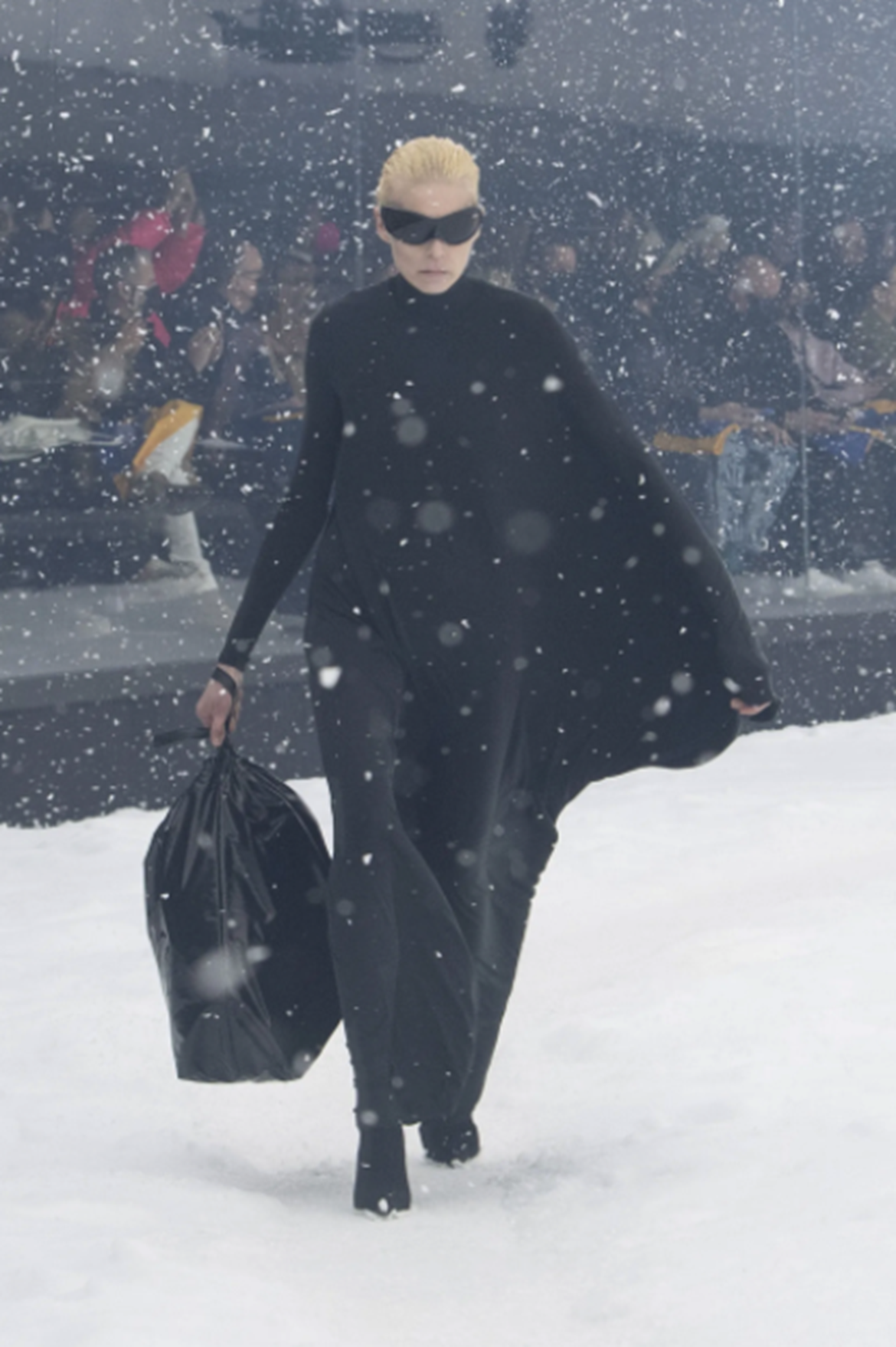 “Personally, I have sacrificed too much to war. These past few weeks are bringing back all the memories that my mother and I put away in a box, and never looked at. We never got over it.”

To preface the show, blue and yellow Ukrainian-flag T-shirts were laid on every chair, with a printed statement from Demna, ending on the note that love must win. Then his voice filled the auditorium, reading the encouragement to believe in Ukraine by Oleksandr Oles, one of the nation’s great cultural poet-heroes. No doubt about it, Demna wanted that to be heard solely in the Ukrainian language. No translation was provided. It would be understood by that those need to hear it, he said.

Set in a glass rotunda as a simulation of a giant snow-globe, the production had been planned as one of Demna’s meta-immersive confrontations with climate change, projected into a time not very far ahead when snow will not exist, and become a wonder only ‘experienced’ through virtual reality.

But the staging: models struggling forward, bent against driving snow and wind, some carrying heavy tote bags, took on a whole other significance in the agonizing context of current reality.

All these anxieties—environmental, geopolitical, the fear of the dark forces that are really in charge—have come to pass. Where does that leave fashion? Demna’s tribe of Balenciaga survivors continued, despite everything, stomping in their stiletto heels and thigh-high boots in snow-blasted headwinds towards whatever future lies ahead. 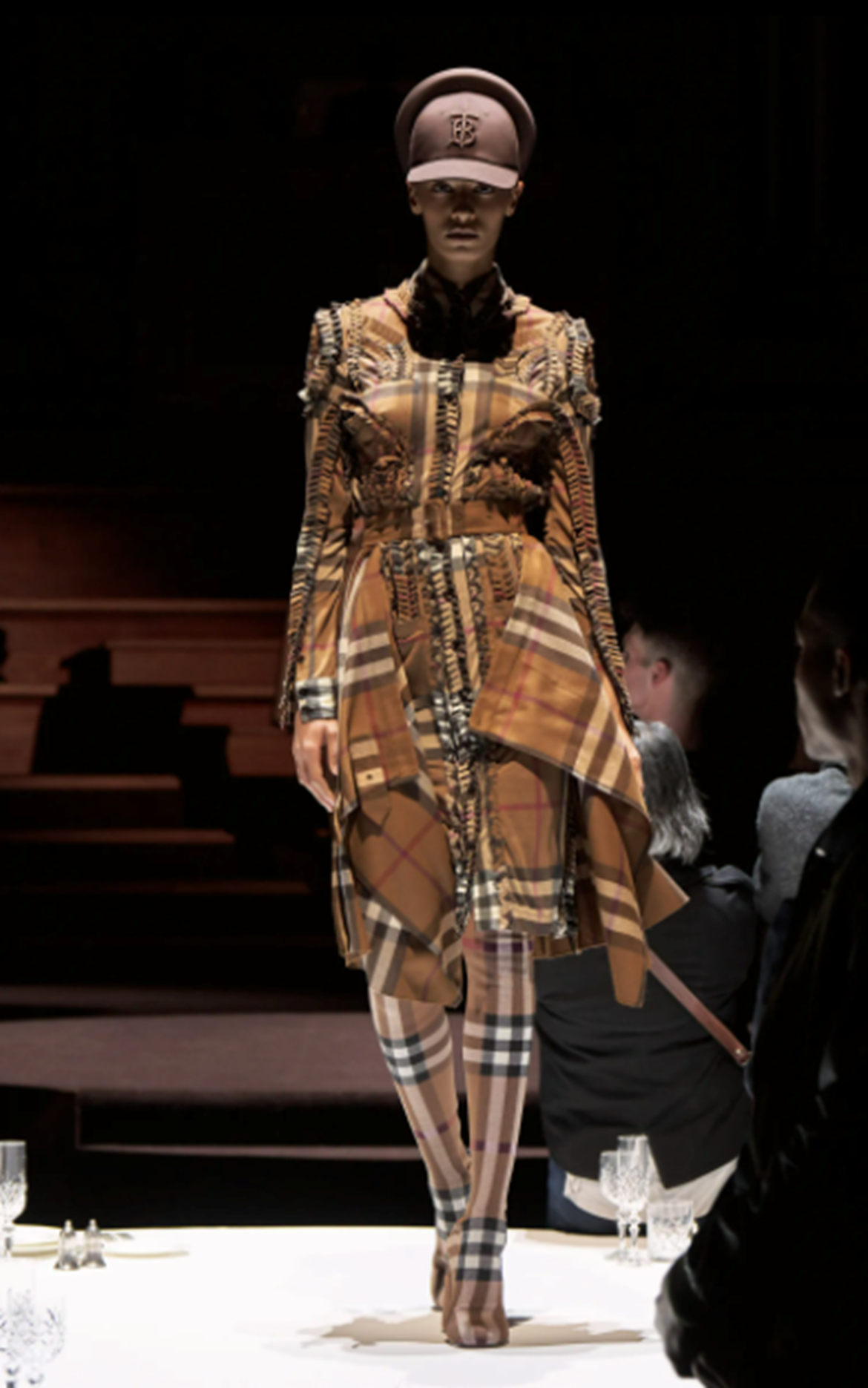 Riccardo Tisci and Burberry hosted a massive real-life event held at London’s Central Hall Westminster. People stood massed together in the dark, un-ranked, unmasked, shuffling back to give way to Riccardo Tisci’s supermodels, friends, and artist-celebrities as they descended from somewhere high up in the wood-paneled auditorium. Clad in the spectrum of Tisci’s ideas about global, generational, and gender non-conforming realities, British tradition and, of course, Burberry checks and trenches, they climbed up to pose on tables which were set with silver and crystal, as if for a country-house dinner. A hundred-strong choir sang, an orchestra played. The event simultaneously managed to be a bombastic reclaiming of Burberry’s corporate position, a landmark of the British fashion business with global reach. Two collections were shown, both focusing on reaching a new audience for the British heritage brand. Will Tisci succeed? 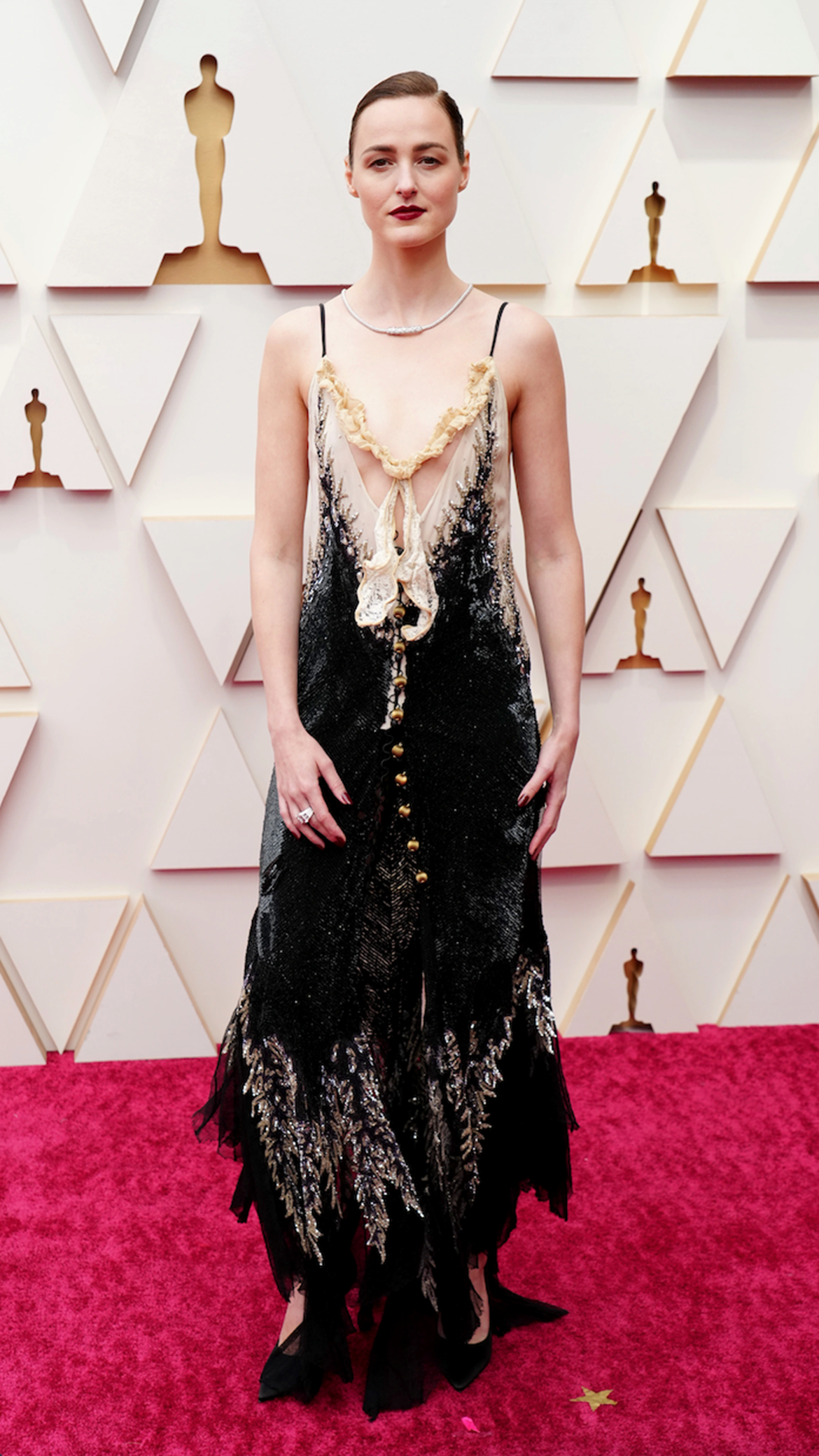 Anyone who has watched Joachim Trier’s hilarious, heartrending, and now Oscar-nominated The Worst Person in the World knows that Renate Reinsve is a born movie star.

Along the way, Reinsve has proven that she’s a red carpet force to be reckoned with, refining her particular eye for sleek gowns and boxy tailoring that speak to her Scandinavian roots, but always adding a gently idiosyncratic twist.

It’s no surprise that Reinsve has become a recurring face at Louis Vuitton’s runway shows and events too, with Nicolas Ghesquière’s polished eclecticism proving to be a perfect fit for the actor’s already well-defined tastes.

Finally, her stylist Karla Welch—whose name you might recognize from her work with the likes of Justin Bieber, Tracee Ellis Ross, and Sarah Paulson—posted a snap of Reinsve  in a slinky black twisted suit with flared trousers by The Attico and a simple Ana Khouri ear cuff for a touch of something edgier. It was Reinsve’s style formula in a nutshell: a razor-sharp silhouette with a final offbeat touch to punctuate the look and lend it some extra, unexpected flair. Although The Worst Person in the World didn’t go hom with any Oscars, here’s hoping she picks up some new roles while over in Hollywood, too—even if only to get more of her standout red carpet style moments. 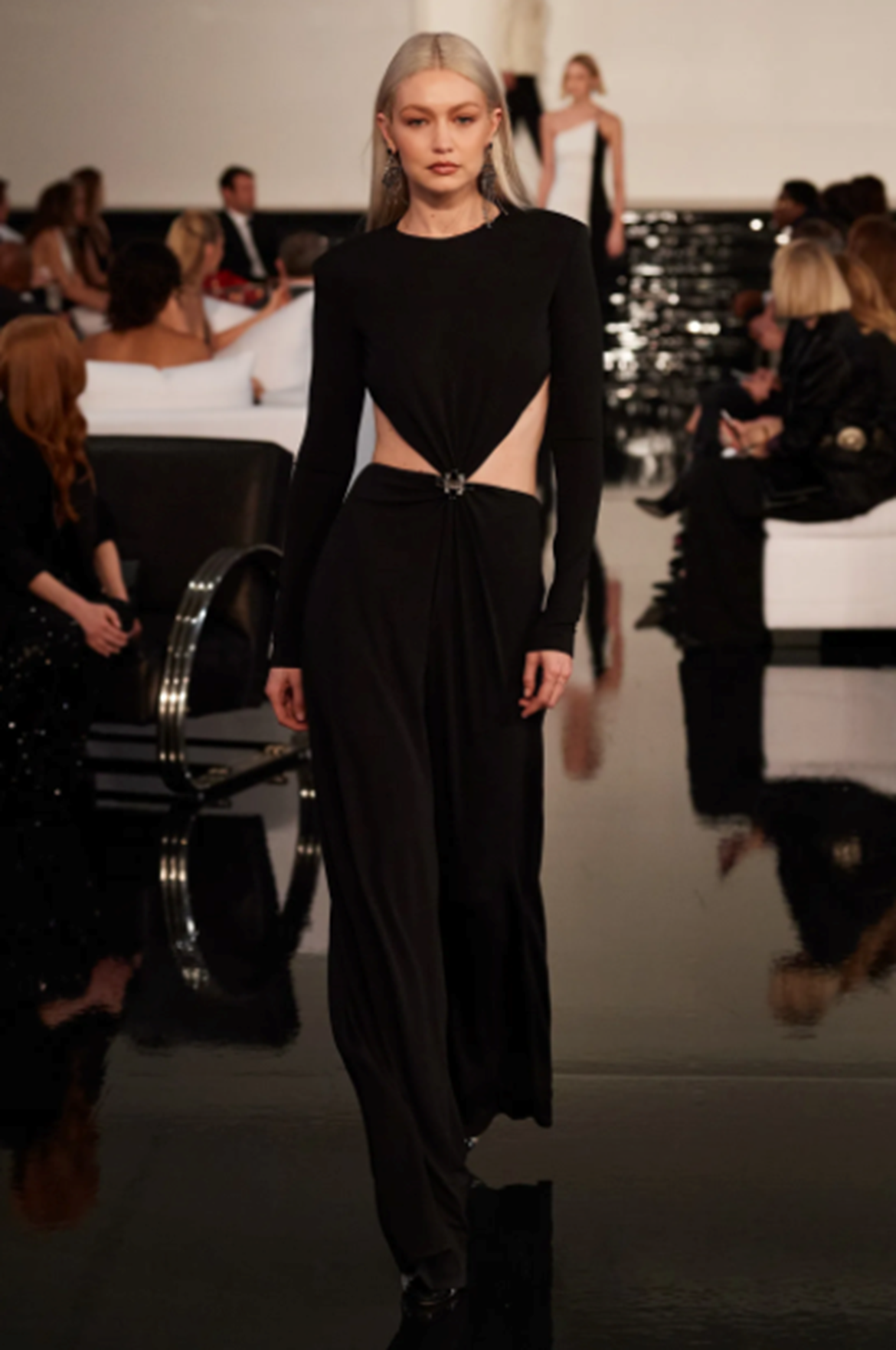 For his comeback show at the Museum of Modern Art, Lauren recreated his Fifth Avenue living room, down to the steel-armed lounge chairs, coffee table books, and black-and-white photos on the walls depicting his real-life Central Park views. His new collection for fall touched on many of his famous signatures, as well as being an ode to the brand’s long history of being an American institution.

From that beginning, there was a passage devoted to classic black-and-white tailoring; an après-ski section that saw a bejeweled Fair Isle sweater paired with a floor-length skirt; a few looks devoted to the very Ralph pastime of horseback riding,and a high evening series that read like a love letter to New York, not least of all a black column dress with the skyline picked out in crystals.

In fact, Lauren’s vision is more expansive than it was before the pandemic and the racial justice reckoning of 2020. Earlier in March, the brand unveiled a new collection, Polo Ralph Lauren Exclusively for Morehouse and Spelman Colleges, that reimagines the collegiate prep look that is so much a part of his repertoire in a more inclusive fashion. It follows the $2 million pledge that the Ralph Lauren Corporate Foundation made last year to support scholarships for students at 12 historically Black colleges and universities across the country.

Is Metaverse Fashion Week The Future Of The Industry?

It’s undeniable that the hot topic of the moment is the metaverse. When Decentraland hosted the first ever Metaverse Fashion Week last weekend, the industry’s interest was piqued. Did it deliver everything to an optimal standard? Much may have been left to be desired, but there’s hope for the future.

“Web3 and the metaverse serve as complements to fashion activations IRL,” Giovanna Graziosi Casimiro, head of Metaverse Fashion Week, tells Vogue. “Instead of pitting the two against each other, brands should embrace both spaces and use them to amplify their brand narrative and reach new audiences.” Featuring a roster of labels ranging from the established, such as Etro, Dundas, Dolce & Gabbana, and Elie Saab, to the more independent likes of Imitation of Christ, Gary McQueen, and Auroboros, the schedule was packed with notable virtual moments to delve into. But each had an agenda of their own in the metaverse.

Notably, few fashion insiders attended the shows, but the presence of strong brands as well a the increasing importance of digital, shows that this could only grow bigger.

This is a picture of the Front Row at Dundas show.